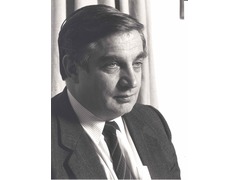 Cabinet notes, letters, mission statements concerning the Judgement of the European Court in the Nouvelles Frontieres case which recognised that the Treaty of Rome, including Article 85, applies to international air transport within the EEC and Sutherland’s work on the liberalisation of the EEC air transport regulation and the concessions he made to achieve a reasonable consensus within the College, includes: Draft communication of the Commission to the Council by Mr Clinton Davis on Civil Aviation, COM(86)228. Legal Service Memo "Competition and Civil Aviation". Briefing notes on political points for Commission on air transport. Documents on EEC’s ultimatum on air fares. Results of Transport Council’s discussions on air transport. Correspondence between Sutherland’s Cabinet and Mr Clinton-Davis, Member of the Commission concerning action to require Community Airlines to conform to EEC rules on Competition

Location of Originals
Historical Archives of the European Union