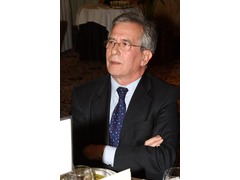 Mr Landaburu describes how the experience of exile since he was a child influenced his political vision, then he talked about:
- his affiliation to the Spanish Socialist Workers‘ Party;
- his international contacts since the 70s with the other Socialist European Movements and the role he played in the Department of External Affairs and in particular- European Affairs inside the PSOE;
- how he became a strong supporter of Spanish European Integration;
- the internal reorganization the DG Regional Policy (DG XVI), the importance of a progressive involvement of regional and local representatives;
- the creation of an evaluation unit, in order to have a better control over the assessment and the evaluation of the projects implemented;
- the relations DG XVI had with the European Parliament along his mandate and the relation DGXVI had with the other Directorates in particular with the one devoted to Social Policy, to Agriculture, and to Transport;
- how much - especially under Delors presidency of the Commission- Regional programmes, modernization and development of European internal market were related each others as different aspects of a single project.